Not just a sale, but a lesson for anyone wishing to FUND the purchase of a lighthouse home.

Back in 2012, there WERE 5 lighthouse keepers’ cottages in this former lighthouse compound for sale. The whole row of buildings (excluding the tower) were placed on the disposal market at £950,000 (here). At that time they were all in a less than good condition; requiring a fair amount of work to bring each back up to a decent, habitable standard.

The location and provenance – being next to a lifesaving lighthouse, plus great views across the sea meant that someone was going to do something interesting here.

We had no idea how fascinating our literary detour to Pembrokeshire would become. Researching the house transactions are a lesson in property purchase/sale that may be helpful and educational for many of our readers.

This set of statistics derived from HM Land Registry after the sale of £950,000 didn’t happen say a lot about what went on behind the scenes.

Would you have guessed someone saved themselves £508,000?It certainly raised eyebrows at our office – LHFSOR HQ…

Not sure how your mental arithmetic is, but it shouldn’t take to long to work out the whole sale totals for this round is £442,000.

That is half a million pounds less than the publicly disclosed asking price in 2012. Think on that for a moment. Someone effectively saved £508,000. What do you reckon to that? We can all draw lessons on price flexibility and research tools as indicated in the narrative above?

All five houses sold on 4th December 2015. It is reasonable to deduce this was all to the same person/company. Likely for tax of title delineation reasons.

Notwithstanding the dawning realisation of a stonkingly interesting property purchase behind the scenes in Summer/Autumn 2015, someone has spent a lot of money bringing each house up to a good standard. Here, in this example, is cottage number 5 after refurbishment..

Maybe an idea to get your finances and due diligence ready for Cottage 5, or the next one that will come up for sale. A head start can really give you the edge in succeeding with a lighthouse purchase.

It is also a good thing to look at the “Leasehold” terms and length for the St Anns lighthouse buildings. Plus, of course an RICS survey.

There is some debate as to whether all these houses were lighthouse keepers’ or possibly utilised by HM Coastguard. We would refer to the HM Lasnd Registry excerpt above. Trinity House is the general lighthouse authority for England and Wales. So it is pretty likely they are or were originally lighthouse keepers’ homes. Further information on previous occupants is a property detective job for the new and/or prospective owner.

Agency Narrative for ONE of the properties…

No 5 Lighthouse Cottages dates back to circa 1970’s and was originally built as the Lighthouse Keepers’ dwelling and has outstanding sea views. The property is currently being used as a very popular and successful holiday let, so would make a superb investment as well as a family home. The property has three double bedrooms, a modern bathroom, a very good sized lounge/dining room with open fire as well as a well equipped kitchen with some integral appliances.

The Reason For The Cottages: Lighthouse Tower

Cottage number 5 is an end terraced property with garden and off road parking. It also has a terrace of four garages and benefits from planning permission for a disabled extension with carer’s accommodation (planning reference NP/17/0233/FUL). The property has been updated over the years and now offers a beautiful home with the modern facilities which we have all become accustomed to.

Cottage number 5 has outstanding panoramic sea views overlooking the entrance to Milford Haven waterway which is one of Britain’s deep water harbours. The working lighthouse is still a prominent feature of St Ann’s Head. Do not miss the opportunity of owning such a delightful property positioned in such a spectacular location!

This Relates To Cottage Number 5

£79,000: Lighthouse Station Walled Garden Building For Sale. Plus Land. Also option to rent a fully renovated former lighthouse keeper’s house within this compound for £99 per week during the period of planning application and renovation of the Walled Garden Building. CLICK THE PHOTO ABOVE for the link to read more. 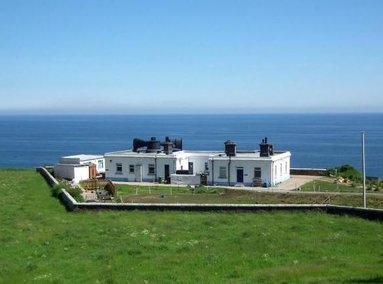