This North Devon lighthouse on the southern parts of Britain is a genuinely beautiful place. Located just outside Mortehoe, the former lighthouse keepers’ accommodation has been transformed into four self catering cottages – Warden, Siren, Triton, and Sherrin.

Nearby is Woolacombe and a beautiful blue flag sandy beach. Just a few minutes drive from Bull Point.

The original lighthouse was constructed in 1879 after a group of local “clergy, ship-owners, merchants and landowners” appealed to the commissioners at Trinity Lighthouse Board. Thereafter in 1919 a foghorn was added. The lighthouse lantern was converted to electricity in 1960.

In September 1972 the headland on which the lighthouse stood subsided making the structure dangerous. Trinity House used an old light tower from elsewhere for two years whilst a new structure was rebuilt further inland. This was completed in 1974 at a cost of around £71,000.

The new Bull Point Lighthouse Tower stands around 11 metres high and has a light intensity of 800,000 candelas with a range of approximately 24 nautical miles – depending on weather, fog, etc. The foghorn was turned off permanently in 1988 given advances in global positioning ship navigational systems.

The lighthouse was automated in 1995, and once the keepers had retired, the houses became empty, and can now be accessed by members of the public for holidays looking to enjoy self-catering holidays 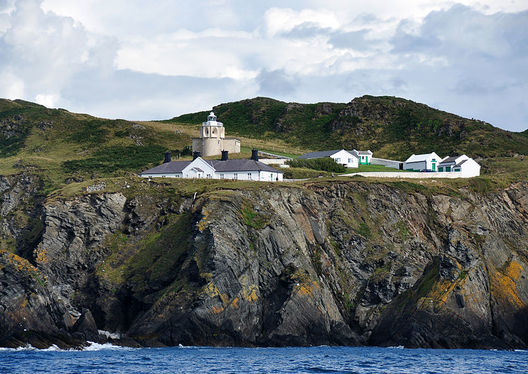 £79,000: Lighthouse Station Walled Garden Building For Sale. Plus Land. Also option to rent a fully renovated former lighthouse keeper’s house within this compound for £99 per week during the period of planning application and renovation of the Walled Garden Building. CLICK THE PHOTO ABOVE for the link to read more.